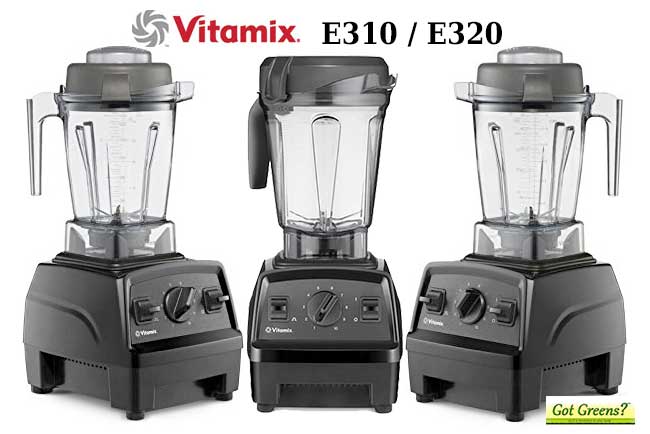 A new Vitamix for the lowest price ever offered.

The Vitamix Explorian Series featuring the E310 and E320 is a new series release from Vitamix, designed to bring epic Vitamix performance for the most affordable price yet. The Explorian is a feature simple model with solid performance. HOW DOES IT COMPARE?

+$20 OFF » Reconditioned Explorian (in cart)

For an all Vitamix model review see our » Vitamix Buyers Guide. Vitamix makes powerful blenders and the Explorian Series is no exception. It essentially replaces the 5300 and most closely resembles the current Legacy Series 5200.

With 13 amps, the motor peaks at 2.0 horsepower, sufficient for blending most anything. Making super smooth smoothies is easy as well as nut butters, hot soup, frozen desserts, hummus, and much more.

The variable speed control along with the pulse feature provides complete control over your blending experience.

Vitamix continues their stellar warranty offering including a 5-year full use warranty. The warranty covers all parts, service, labor and shipping both ways at no cost! It just doesn’t get any better than that. If five years isn’t enough you can purchase an additional 3 years at the time of purchase.

The Vitamix E310 comes with the classic 48-ounce container. Personally, we love this container! If you could only have one container with your Classic Vitamix then this would be the one. A great volume, very accessible for removing your blends and extremely efficient. But not to worry, if you want or need additional containers, the Explorian Series blenders are compatible with any of the Classic blending containers.

The Vitamix E310 is most comparable to the Legacy C-Series blenders such as the 5200. These two models have essentially the same motor and features. There are some upgrades in design to closer resemble newer models and a slight difference in controls. Both have an on/off switch and variable-speed dial. The main difference is that the E310 has a dedicated pulse switch where the 5200 does not.

Instead of the pulse switch, the 5200 series has a high/variable switch. When on high, the Vitamix 5200 blends at maximum speed, when on variable the speed knob controls the speed. Therefore there is a slight difference in the variable-speed control. The E310 has complete speed range where the 5200 requires the High switch to reach maximum blending speed.

The other difference in purchasing these two models is the warranty. The E310 comes standard with 5-years while the 5200 with 7-years.

The Vitamix 5300 was a hybrid C-Series blender primarily made for Costco. The E320 replaces the 5300. They both have the pulse switch and the complete range variable-speed control. The 5300 also has a separate power switch and the on/off switch is a start/stop switch. Additionally, the 5300 comes standard with the compact 64-oz blending container like the E320.

As with the similar Legacy models a difference in purchasing these two models is the warranty. The 5300 comes standard with a 7-years warranty compare to the 3 years of the E310.

The Legacy G-Series blenders, including the Vitamix 7500, comes with additional sound dampening technology that the Explorian Series blenders do not have. This means that the 7500 is quieter than the E310 and E320. For some customers this difference in sound level is well worth the additional cost.

The 7500 also was the model that introduced the compact 64-ounce container. Its controls are the same as the 5300 above with a separate pulse switch and power switch.

As with the previous models compared above, the 7500 comes with a 7-year warranty at no additional cost.

Early 2017 Vitamix launched one of their most exciting new blender series in history – the Ascent Series. These new models not only came with an impressive modern redesign, they also introduced advanced technology not yet seen in Vitamix blenders, like digital display and wireless communication.

The low-end blender of the Ascent Series, the A2300, is the model most closely comparable to the Explorian models. It doesn’t come with the bells and whistles found on the other models which come with a much higher price tag.

Controls of the Ascent Series A2300 are essentially the same as the E310/E320 with the difference of a separate power button. The A2300 also includes a digital timer display that counts up while it continues to blend; the Explorian Series has no digital display. In addition to improved design, a major difference between the E310/E320 and A2300 is that, like all Ascent Series models, the A2300 comes with “smart” Self-Detect technology which requires new containers made only for that series.

The Ascent series came with the new 10-year warranty.

In addition to the E310, the Explorian Series has a second model, the Vitamix E320. This is essentially the same blender made for Costco and also available on Amazon. The differences between the E310 vs E320 is the container and warranty. For a higher price, the E320 comes with a low-profile 64-oz container and a 7-year warranty.

Newly released is the Reconditioned Explorian E320. Save more on an Explorian Series E320 Reconditioned. You can have it all, the best price and the 64-ounce container. Great savings for an excellent Vitamix blender. More about » Reconditioned blenders.

The Vitamix E320 PCA Package is another Costco exclusive bundle. It is the Explorian E320 with 20 oz cups and an adapter for direct 20 oz blending.

The Explorian Series is a great choice for anyone considering a Vitamix for the first time. It is a solid performing powerhouse at the most affordable price of any Vitamix. If you are not wanting or needing the bells and whistles of the Ascent Series then you can’t go wrong. If the container size is a concern, have no fear, all classic container are compatible so you can use any previous container you may have or pick up one in a different size.

Explorian Series – Starting at $269 in cart with free shipping